Novak Djokovic, the world number one also became the first male player to reach the ATP semi-finals after a clinical win. His win over Alexander Zverev. After an extremely close and physical first set, the German had to accept that the Serb beaten him 6-4 6-1. After chasing the chance to play in the ATP Finals since as far back as 2015, Djokovic reached it after John Isner was beaten by Marin Cilic, he had to admit that it wasn’t exactly a breath-taking match, yet it was a win.

Novak Djokovic About the Match 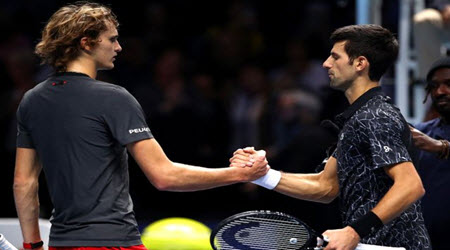 Novak Djokovic felt he played well through the second set and served well during the start and second set, while he also recognises that his opponent did make several unforced errors, which counted in his favour and assisted him to achieve a win. It was Zverev’s double fault that basically handed the win to Djokovic in the first set and looking back at the match a total of thirty-three unforced errors is what hugely contributed to the downfall of the 21-year-old.

Novak Djokovic is by far the favourite to claim his sixth title by winning the seasons tournament, and he had a remarkable year, this includes him recovering from elbow surgery and then to go on to win the US Open and Wimbledon, while also returning to the top rankings after two years.

Rated Number One in Singles Tennis in the World

The Association of Tennis Professionals, currently ranked Novak Djokovic as the number one in the world of singles tennis. His successes include thirty-two series titles in the ATP World Tour Masters 1000, fourteen Grand Slams, and he is known for holding the number one ATP spot for more than two-hundred weeks.

With an emphasis on aggressive play, Djokovic is an all-court player, while his groundstrokes are penetrating, deep and consistent from both wings. His backhand is regarded as the best it has precision and great pace and then Djokovic is also a fantastic mover on the court with impressive court coverage, superior agility and major defensive ability, allowing him to continuously hit winners from what appears to be defensive positions. His extroverted personality makes him a favourite right through the world, and his fluency in numerous languages never fail to impress. The Novak Djokovic Foundation assists disadvantaged children to develop and grow up in safe and stimulating environments. The foundation was founded by Djokovic in 2007. It partnered in 2015 with the World Bank and promotes education to children in Serbia, and after Djokovic’s Australian Open he donated $20,000.00 to the early childhood education of disadvantaged children to Melbourne City.