Serena Williams was born Serena Jameka Williams on the 26th of September, 1981. The tennis player is from the United States of America and is currently unranked after only recently returning to the sport after giving birth to a daughter. 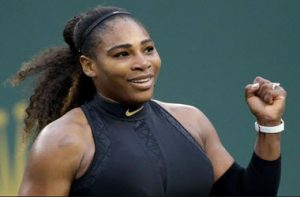 As a player, Serena began at the tender age of three, and as she entered the Women’s Tennis Association, she won her first major championship in 1999 and achieved the first of several Grand Slams in 2003. Williams went on to earn twenty-three Gram Slams to date, with her last coming with her defeat of sister Venus at the Australian Open 2017.

Serena Williams has won a staggering twenty-three Grand Slams since 1999 and has the most on record after her 2017 surpassed the 22 Steffi Graf had won, putting Williams in the history books once again. September 2012 saw Serena beating Victoria Azarenka at the U.S Open to earn her 15th Grand Slam. This was a final that many thought Williams would not win but as history has shown, Williams is one never to count out, yet the win even surprised Williams due to the level of play she faced.

While Williams has won twenty-three Grand Slams as a single, she also has racked up thirteen in the Women’s Doubles. Her sixteenth Grand Slam came at the French Open after defeating Sharapova in two sets. In 2002, Williams added three more titles to her record with victories at Wimbledon, the U.S Open and French Open.

The following year saw her win the Austria Open for the first time and again won the U.S Open in 2013. Her 20th Grand Slam came once again in 2014 at the U.S Open after she proved victorious against Caroline Wozniacki. The wins continued to accumulate with another victory at the Australia Open in 2015.

Serena Williams is married to husband Alexis Ohanian, the co-founder of Reddit. Engaged in 2016, the married in November 2017 in Louisiana. Williams was adorned in a stunning dress designed by Sarah Burton for Alexander McQueen dress. The wedding included a long list of celebrities such as Eva Longoria, Kim Kardashian and Beyoncé.

In the spring of 2017, it was announced that Williams was pregnant and expecting her first child after a snapchat picture was posted with a caption that said “20 weeks”. While the picture was soon deleted, the information quickly spread and was confirmed by Williams shortly thereafter. 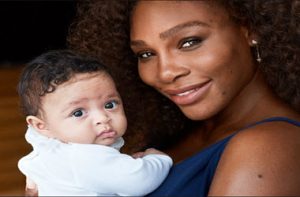 On the first of September of 2017, Serena gave birth to a healthy baby girl that they named daughter Alexis Olympia Ohanian Jr. Williams posted a picture of her daughter on her Instagram account and included a video on YouTube and her website to share the news of her daughter’s birth.

Serena Williams has had a lucrative career in the sport of tennis, having earned many million dollar prizes for her multiple Grand Slam victories. To add to her net worth, the star has entered into multiple endorsement deals with the likes of Mike, Gatorade, Beats By Dre, Intel and others. Her estimated net worth is $84million based on earnings and endorsement deals. 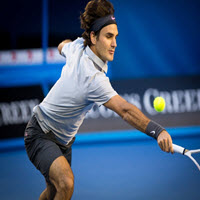 Like any major sport, there have been several greats in tennis. Some tennis players are universal, and we know their names even if we weren’t necessarily old enough (or even alive) to see them play. Who are these greats of tennis, though? Everybody has their own opinions, but same names stand out more than others and are repeated time and time again. We’ve taken on the challenge and come up with the best men and women tennis player

Who is the Best Men’s Tennis Player Ever?

Andre Agassi won over 60 career titles before retiring in 2006, and this American tennis player’s record of 8 Grand Slams, is tough to beat. John McEnroe may have 7 Grand Slams himself, but he is more famously regarded for losing his temper and slamming is racket down in defeat. Both of those pale in comparison to Björn Borg. With 11 Grand Slam titles over a 10-year career, this Swedish star is regarded as one of the best in the business. And who can forget Pete Sampras? His 14 Grand Slam titles over a 14-year career is still remarkable, even today. 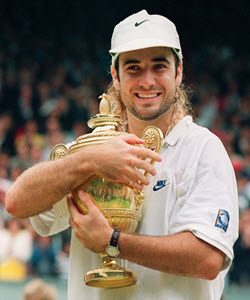 The big winners are all involved in the current game, though. As good as Novak Djokovic and Andy Murray are, they don’t hold a candle to Rafael Nadal, whose 16 Grand Slams and 75 career titles grow each year. Inevitably, the all-time best men’s tennis player, though, must be Roger Federer. The Swiss started in 1998, has won 96 career titles, earned over $115m and won 20 Grand Slam titles. There’s just no matching that, really – not even for Nadal.

And the Best Women’s Tennis Player?

Picking the all-time best female tennis player is more challenging, as the competition is a lot fiercer. Justine Henin, Venus Williams, Maria Sharapova, and Monica Seles are all right up there, as is Billy Jean King is still a firm favourite with tennis fans. King’s 15-year career saw her win 129 career titles, and 12 grand slams, with her aggressive play much admired even today. 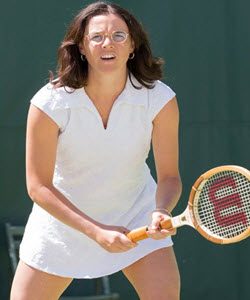 Going into the past, Australia’s Margaret Court and the USA’s Chris Evert dominated in the 70s and 80s, respectively, and deserve to be towards the top of the list. Serena Williams is most people’s pick for the all-time best ladies’ tennis player, but to be honest, many people are biased in this regard. She may be more famous, but she hasn’t won anywhere near as many titles as our top two.

Few real tennis fans would argue that Martina Navratilova and Steffi Graf are duking out for the top spot. We couldn’t pick a winner between these gals, with the Czech winning 167 career titles and 18 Grand Slams from 1975-1994, and her German counterpart bagging 107 career titles and a record 22 Grand Slams between 1982 and 1999. By contrast, Serena Williams has just 72 career titles and 23 Grand Slams. Serena may go on to eventually take our title, but as far as we’re concerned, Navratilova’s double record, and 190 Grand Slam Mixed Doubles titles, and Graf being the first woman to win the Golden Slam but them out in front. 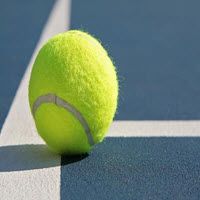 When we think of the highest paid sports personalities on the planet, those players of basketball, American football, baseball, association football, boxers and Formula One often spring to mind. However, tennis players aren’t shy of a few notes, either. In fact, some tennis players are amongst the best-paid sports stars on the planet. As with any athlete, there is a great disparity between the top and the bottom earners. If you wanted to play professional tennis right now, though, what would you likely to be able to earn?

How Much Does a Tennis Player Earn?

As mentioned, the amount a tennis player earns varies, depending upon several factors. For starters, the average salary can be in the millions of dollars range for seasoned pros such as Rafael Nadal, Novak Djokovic, or the Williams’ sisters and Maria Sharapova. These types of world famous tennis stars can easily rack up $5 million or more per annum (solely from tennis). At the middle-end of the top, players ranked around 100th in the world are looking at $100,000 and up. Of course, at the lowest echelons of the tennis ranking system, rank newbies seldom earn anything at all. 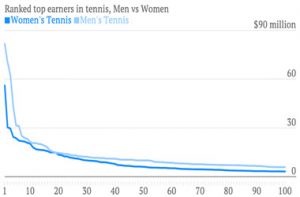 The amount a tennis player earns depends on the prize money they win, and any endorsements or sponsorship deals they may have. They can also supplement their income by doing television interviews, appearing in commercials and other media-orientated opportunities. In many cases, it is these endorsement and sponsorship deals which generate the vast portion of a pro tennis players income. Take Maria Sharapova’s 2012 deal with Nike, for instance. This was estimated to be worth around $70 million over several years. In 2011, Sharapova pocketed $25 million (before tax) from various deals.

The Hidden Costs of Tennis

Tennis players don’t have everything their own way, though. In fact, the pro tennis tours cost money, even for their star players. The high-ranking tennis players in both the men’s and women’s game can cost around $150,000 a campaign or season. These are largely fees for entering the tours, travel expenses and hotel costs for all the luxurious parts of the globe that they travel to, as well as expenses for coaches and assistants and managers.

Provided a tennis player has a sponsorship deal or an endorsement, they often have their clothing, shoes and rackets written off by said companies. At the bottom of the totem pole, budding tennis stars must also raise their own income for such equipment and attire.

The fact of the matter is, this isn’t harsh at all. In fact, if you were to look at any major sport, you’d see the same pattern emerge. The most successful players end up multi-millionaires from sponsorship deals and on the back of their own success, of course. However, the lower-ranking stars must pay their way. For the very best of those budding stars, they will eventually stop paying their dues and make considerable incomes in their own right. But for now, they, the same as you, must start somewhere.