Stan Wawrinka time at the French Open came to a close after being defeated by Novak Djokovic. Wawrinka, who is still building strength after back surgery and ranked low in the world lost to Djokovic in straight sets. 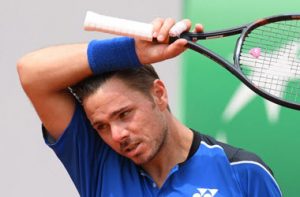 Wawrinka and Djokovic were playing first round action. Previous to sustaining his back injury, and having won major titles on the tour, for Wawrinka, he was unable to carry on the level of play needed

Commenting on his performance, Wawrinka said,

“I won three Grand Slams in my career, and I know what it takes to do it, and my goal is to get to my top. Sooner or later, I will.”

After being out of competition for the last three months due to a knee injury, Wawrinka had only participated in tournaments twice in almost a year. He has played only eleven matches this year. Wawrinka, who is ranked 30th and seeded 23rd for the tournament, is playing in territory that he is not familiar after climbing the ranks since joining the tour in 2008.

The match on Monday lasted over 3 hours. The physicality of that was a strain for Wawrinka was obvious as he had yet to go five sets since facing and beating Andy Murray a year ago.

“It was more the difficulty of continuing to go for it mentally.”

The Swiss player is known for having one of the best backhands in tennis. Wawrinka is once again now being coached by Magnus Norman. The match saw Wawrinka with thirty-five unforced errors and only winning 12.

For Wawrinka, who achieved third in the world rankings in his career, he said

“There is no frustration. It’s just tough, but I’m on the right way. It was very close today.”

Djokovic has previously held the top ranking with the World Tennis Tour but is now listed in 22nd, the worse he has held since 2006. Djokovic moved on to face Brazil’s Rogerio Dutra Silva beating the Brazilian in three sets after dropping two games during the opening set. 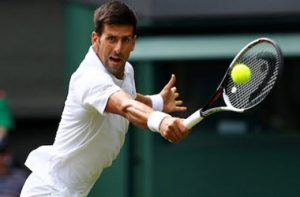 After successfully winning the French Open in 2016, Djokovic was the first male player to win four major titles in a row. However, since that accomplishment, he has failed to add any achievements to his career after sustaining several injuries, one to his right elbow that required surgery.

While at the French Open this week, Djokovic said,

“I had to dig deep. It has been difficult to face … the most, say, challenging injury that I have ever had. It’s been a long 12 months behind me, but I’m starting to play better, I feel like, in the past couple of weeks. Playing pain-free, which is the most important thing at the moment.”

Tournament play at the French Open continues through to the 10th of June. With recent rain and several matches having to be cancelled, it is expected that additional matches will be re-scheduled. Djokovic will next play on June 1st when he faces Roberto Bautista-Agut.