The History of Wimbledon

The history of Wimbledon is a rich one, and it is one of the four Majors. It is also the most prestigious of the Majors, and it is formally referred to as The Championships, Wimbledon. The first Wimbledon was back in 1887, and it takes its name from its location of Wimbledon, which is a suburb of London. The tournament is played at the All England Club, is the only major played on grass courts, and takes place from the end of June to mid-July.

The All England Lawn Tennis and Croquet Club is the full name of where Wimbledon takes place, and it was established in 1868. In 1875, they added lawn tennis to the activities and at this time held the Lawn Tennis Championship which is now known as the Wimbledon Championship. In the first tournament, rules were laid out for the event, and it was held at Worple Road in Wimbledon. The rules of the tournament have not changed much, but some that have included the height of the net, and the distance from the service line to the net. 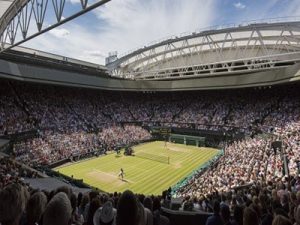 For the first Wimbledon tournament, there was only the Gentlemen’s singles with Spencer Gore being the first champion. The ticket to the inaugural even was a shilling, and 200 people were in attendance for the finals. The main court at Wimbledon is referred to a Centre Court since it is in the centre of the All England Club. In the first Wimbledon, there were 22 players competing for the title and these days there are 128 in both the men’s and women’s singles.
In 1884 ladies’ singles and men’s doubles were added to the tournament and in 1934 the ladies’ doubles and mixed doubles were added. One of the main rule changes to the tournament occurred in 1922, as previous to that year the defending champion automatically made it to the finals where they would face the challenger, who had advanced through the draw. This is why early on in the tournament’s history there are many that won consecutive titles. After 1922 byes into the finals for the defending champion was eliminated and that champion was in the main draw just like every other player. 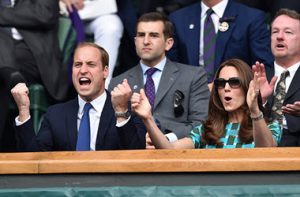 Wimbledon is not only the most prestigious tennis tournament in the world but one of the biggest sporting events in Britain. The British had a long drought for the Men’s title, as no British person had won the event since 1936 until Andy Murray won in 2013. No British woman has won the tournament since Virginia Wade won in 1977.
British Royalty attends the tournament every year, and they have their own Royal Box at Centre Court. One of the things Wimbledon is well known for is the strawberries and cream served at the tournament and in 2017 34,000 kg of strawberries, and 10,000 litres of cream were served. As of 2018, Roger Federer holds the record for the most men’s singles titles with eight and Martina Navratilova holds the record for the most women’s singles titles with nine.