The Biography of Garbine Muguruza 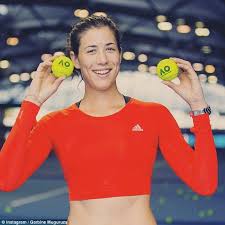 Garbine Muguruza is a Spanish-Venezuelan professional tennis player who was born in the year 1993. She consistently represents Spain for international competition, and she became a pro last 2012. Her first ever WTA title happened last 2014 when she defeated Klara Zokapalova at Hobart International. She claimed her first ever Grand Slam at the 2016 French Open after defeating another legend, Serena Williams. She showed an amazing performance over the years and has improved her foot works. Experts believe that she will continue to become a tennis star in the coming years.

Muguruza was born in October 8, 1933, in the city of Caracas, Venezuela. Her mother, Scarlet Blanco is from Venezuela while his father, Jose Antonio Muguruza is from Spain. She also has two brothers, Igor and Aser who also holds a dual citizenship. She started playing tennis when she was just 3 years old. Her family then decided to move to Spain when she reached the age of six. She will then train her tennis skills at the Bruguera Tennis Academy which is situated near the Barcelona.

Muguruza turned pro on March of 2012 she was then given with the wildcard entry to join the 2012 Miami Open Tournament that serves as her first appearance at the WTA. She then managed to defeat the tournament favourite and the rank no. 2 that time, Vera Zvonareva during the 2nd round. At the third round, she also showed an amazing performance and beat Flavia Penneta. After the promising season, she acquired an injury last 2013. In the end, she had to miss a huge part of the 2013 season.

She then returned to the tennis scene in 2014 and started it with a bang by winning her first ever WTA Title. She also managed to advance on the 4th round of the Australian Open 2014. She entered the quarter finals at the French Open after defeating Serena Williams. In 2015, she effectively defended her Title of Hobart International. She also entered the final rounds of Wimbledon, but unfortunately, she lost to Serena Williams. After the event, her ranking jumped to the 9th slot.

In 2016, Muguruza finally managed to win her first ever Grand Slam after defeating Serena Williams at the French Open Tournament. This victory has propelled her ranking to the 2nd slot. In 2017, she entered the US Open where she managed to beat Magdalena Rybarikova that led to her rise at the no.1 rank.

Aside from the single matches, Muguruza is also playing the doubles where she already won a total of 4 WTA Titles. She is a right-handed player, and according to her, her favourite shot would be the two-handed backhand. She has an approximate height of 6 feet. She looks at Serena Williams and Pete Sampras as her idols in tennis. After her consecutive winnings, Muguruza became an effective endorser of various brands. She became the brand ambassador of Babolat, Maui Jim, Addidas, Rolex and Mazda Spain.