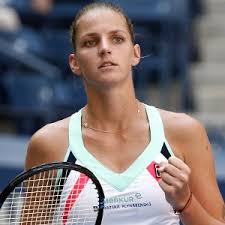 Karolina Pliskova is a female tennis player and a former champion though she is not performing very well lately. However, during her best times, the fans have always had her back and cheered her through several victories playing in singles and doubles. So who is Karolina?

She is a twin sister to Kristyna also a tennis player, and they were born on the 21st March 1992 in the Czech Republic. She currently resides in Monte Carlo in Monaco. She started playing tennis when she was four years old, and since then she has always been on the court. Asked how she first started playing tennis, Karolina said that she was introduced in sports by her parents. Her inspiration was her dad who was playing Ice Hockey, and there was none of her family member who was in active sports. She further explained that she used to watch tennis on TV and her best female stars from who she got the inspiration were Martina Hingis and Monica Seles not forgetting the many players who came from her home country. This was the reason why she started playing her favourite sport.

Karolina has had nine singles wins in her tennis career and five doubles on her WTA tours. In her ITF, she has registered 10 singles and six doubles only. Her best achievement has been when she was crowned worlds number one female tennis player in Grand Slam Final which was in 2016 during the 2016 US Open. Her first win was when she was playing as a junior during the 2010 Australia Open playing against Laura Robson. In her professional as a senior, she won her first Grand Slam tournament main draw in the year 2012 at the French Open. However, she lost to then world number 8 Marion Bartoli after losing to her in her first round. Later in 2013 while at the Malaysian Open, she won her maiden title after defeating Bethanie Mattek in the three sets they played.

After losing on several occasions, the year 2014 she had several major breakthroughs reaching the finals of her second major WTA tour which was played in Pattaya City after beating an American. Unfortunately, she also lost again to Ekaterina Makarova in the finals. In 2015 she showed signs of improvement when she beat the former world champion Victoria Azarenka, but she lost the second round to her. However, the year would not end without her achievement to the top twenty players of 2015. The year 2016 was a bright one for the former world champion since that is when she won several titles. This was the same year when she won the US Title and became a world champion.

Karolina Pliskova is known for her aggressiveness while on the pitch, which is characterised by forceful groundstrokes. In midcourt, she is known for accuracy and power. She is currently ranked worlds number 4. We look forward to seeing more from her in 2018.