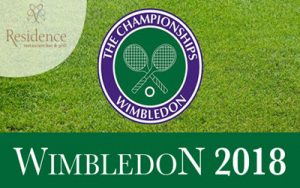 Currently, Wimbledon 2018 is on day five of the highly anticipated tennis tournament. Although, day five has held more shocking revelations and results that viewers were not expecting in the least. Despite the events of day five, Nick Kyrgios is still the leading name in headlines while Serena Williams alongside Roger Federer is gaining momentum in the courts during their spectacular and attention-grabbing matches.

1. Roger Federer impresses the spectators against the match with Jan-Lennard Struff

All through this Wimbledon, Roger Federer has been impressing people left and right with his flawless skill on the court. It also seemed too flawless since no matter what the German native, Struff threw at Federer – he always seemed to have the best reaction. While the Swiss player, Federer needed another hour and 34 minutes to win the match, he seemed to be bouncing with excitement as he increased his ongoing winning streak to 29 during this Wimbledon.

2. Venus Williams is the latest tennis star to fall short during the tournament

During this year Wimbledon tournament, Venus Williams, Serena’s Williams sister who was another top seed has fallen out of the tournament. Meaning that currently, after Venus Williams fell out, eight out of the top 10 seed players in the women’s singles did not make it through the last 16. A former Aussie semi-finalist has commented on this development by stating that one of the major reason for this is due to the players not having adequate planning when the match isn’t going as desired. While Venus may be out of the Wimbledon, the other Williams sister, Serena is still in the competition.

While her competition may be falling behind, Serena is showing that she knew how to hold her own in a competition. Trough each one of her matches, she is showing that she definitely deserves her place as one of the higher level seeds in the tournament. Despite doing so well, Serena has commented that her making it to the round of 16 twice during the competition is not a bad deal. Although, the star player knows that she can do better if she tries a bit harder and pushes herself a bit more.

4. Serena Williams makes her way into the fourth round

As Wimbledon reaches its fifth day, the fourth round of matches is ending. While Williams is playing a singles woman match during this year’s tournament, she is becoming one of the few remaining as eight of the top ten has already been dropped. Williams other competition, such as the doubles matches with Cameron Norrie and Jay Clark. While the duo may not have been as successful as originally planned, watching them stay energised during a five-hour match proved to be one of the most exciting parts of day five.

5. Nick Kyrgios is the Headliner of the Day

During last year’s Wimbledon, Kyrgios caused a bit of online controversy due to his harsh remarks. The same behaviour is taking place this year as the player, he has received a code violation for using foul language, has been in a heated twitter exchanged against James Keothavong. Despite this, not much has been happening with the player as he awaits his next match.