Nadal entered the Phillipe-Chatrier court by acknowledging the screaming fans by dropping his bag, then taking off his jacket he did a little jig that previously had the full house crowd at his feet. Dominic Thiem broke Rafael with a forehand in round three and to his credit, he did bring his biggest shot to the game. 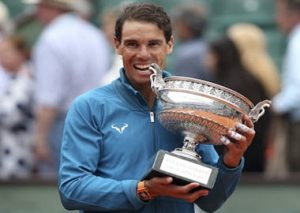 For Nadal or any other professional tennis player, winning 11 titles is not even a dream, it is simply unbelievable. Nadal raised his arms in celebration as he turned towards his team, it was indeed celebration time as the 2-hour 42-minute French Final ended.

Rafael suffered from cramps during the third set, which made victory so much sweeter, the cramps he explained, is what happens when you as a player are really pushed, in a match. In the final Nadal triumphed 6-4, 6-3 and 6-2 against Dominic Thiem.

Played under heavy skies the final ended on a high note for the 32-year-old, while the 24-year-old Thiem continued to fight until the end. Dominic Thiem later told the press that he watched his first final on television when he was only 11 years old. He also watched the match in which Nada won his first Roland Garros title on television in 2005. It was his dream to one day, play a final against Rafael Nadal.

Dominic Thiem feels what Nadal achieved is amazing. In total, the Spaniard has 17 major crowns, each as special as the one before it and he wept as the 80-year-old legend, Ken Rosewell presented him the Coupe des Mousquetaires.

The eleventh time champion, Rafael Nadal went home with €2,200,000 for this victory, after he praised and applauded the young Dominic for great play. He also ensured the young opponent that he’ll be a big winner. Nadal shared that Dominic is not only a fantastic player he is even a greater person.
World number one Nadal earned his 17th grand slam, which only three adrift of that of the all-time men’s record holder Roger Federer. In Grand Slam totals the last six were win by either Federer or Nadal.

While Thiem had few answers to the brilliance of Nadal, the 7th seed used both his mental resilience and athleticism during the match, after he did show some nerves as he failed to find his rhythm in the opening game.